Joy at the end of the run

A competitor and his charges reach the finish of a bull race, in Batu Sangkar, West Sumatra.

Pacu Jawi is a 400-year-old tradition in the area, held after the rice harvest once the paddies have been cleared. Competitors yoke themselves barefoot to two bulls using a wooden harness, and drive the animals by gripping their tails.

Winners are judged by their ability to run in a straight line, and by whether both animals are cooperating. Some 600 bulls and 50 farmers participated over a number of races in Pacu Jawi in February.LocationTechnical information

Nationality:
Malaysia
Website:
www.pbase.com/chenws
About:
Dr. Wei Seng Chen is a Malaysian freelance photographer. He takes on assignments for local and foreign photo agencies or event management companies, shooting mostly sports events and tournaments.  Dr. Chen began experimenting with photography at the age of 13. He joined his school’s photography club in 1975 and learned all about photography, from shooting and processing film to making prints in the darkroom. However, he had to take a break from photography when he enrolled in medical school.
26.Mar.13 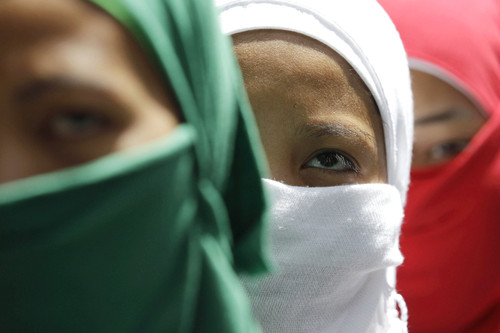 "Muslim women rallied outside the Office of the Presidential Adviser on the Peace Process in Pasig, Philippines, Wednesday, to express concern for the peace process between the government and a Muslim rebel group."