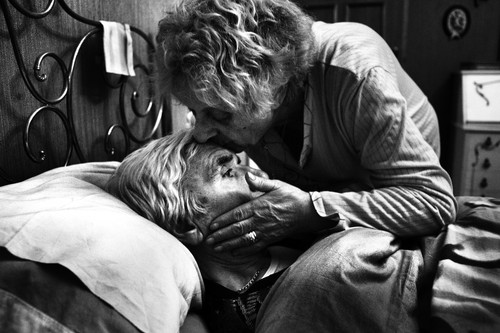 Mirella was married to her husband Luigi for over 40 years. At the age of 65, Luigi began to show symptoms of Alzheimer’s disease. For six years, Mirella cared for Luigi herself, at home in Rome.

Alzheimer’s is a progressive degenerative illness that can affect memory, thinking, behavior, and emotion, and is the most common type of dementia. Over 36 million worldwide people live with dementia, and numbers are increasing as populations age.

For Mirella, it meant that everyday tasks became long and difficult operations involving both of them. At one point Luigi seemed no longer to understand what the cutlery and food set before him were for, and stopped eating. He appeared unable to distinguish between day and night, and his confused body clock—sleeping during the day, and staying awake at night—disrupted Mirella’s daily rhythm, too. After five years of the disease, Luigi no longer recognized his wife. He died in May 2011, with Mirella and their family at his bedside.

Nationality:
Italy
Website:
www.faustopodavini.eu
About:
Fausto Podavini was born in Rome, where he still lives and works. His passion for photography began when he was 18, first as assistant and studio photographer, then working on ethnological and social reportage. In 1992, he worked at MIFAV, the photography museum at Tor Vergata University in Rome and then studied at the John Kaverdash photography academy in Milan, taking a master’s degree in reportage. Podavini left studio photography to dedicate himself exclusively to reportage, and is nowadays a freelance photographer, collaborating with a number of NGOs.
Esta página utiliza cookies. Consulte a nossa Política de cookies.