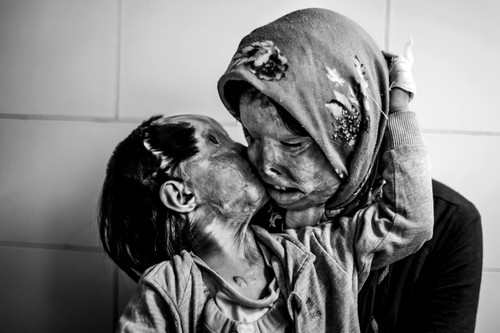 Somayeh Mehri, before she was attacked with acid.

Somayeh Mehri (29) and Rana Afghanipour (3) are a mother and daughter living in Bam, southern Iran. They were attacked with acid by Somayeh’s husband Amir. Somayeh had frequently been beaten and locked up by her husband, and finally found the courage to ask for a divorce. Amir warned her that if she persisted in her attempts to leave him, she would not live out life with the face she had. One night in June 2011, he poured acid on Somayeh and Rana as they slept. Somayeh’s and Rana’s faces, hands, and, in places, their bodies were severely burned. Somayeh was blinded, and Rana lost one of her eyes. Somayeh’s father sold his land in order to raise money to pay their medical expenses, and fellow villagers have also helped.

Nationality:
Iran
Website:
www.ebrahimnoroozi.com
About:
Ebrahim Noroozi born in 1980 in Tehran, Iran. He began working as a professional photographer in 2004, with Fars News Agency. His photographs have appeared nationally and internationally, in such publications as The New York Times, Time, The Washington Post, and have been distributed by Agence France-Presse, the Associated Press, Reuters, United Press International, and the European Press Photo Agency.
Esta página utiliza cookies. Consulte a nossa Política de cookies.