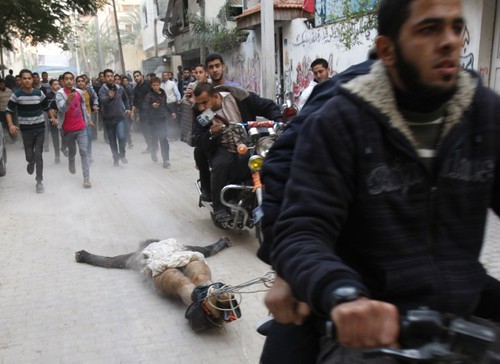 Palestinians drag the dead body of a suspected collaborator with Israel through the streets of Gaza City, on 20 November. That week had seen heavy bombardment of Gaza by Israel, in what was known as Operation Pillar of Defense.

The dead man was one of six alleged collaborators killed at a city intersection by masked men, who forced them to lie on the ground, and shot them in the head. The military wing of the ruling Hamas organization claimed responsibility for the deaths.

Nationality:
Palestinian Territories
About:
Adel Hana studied computer science at The American University in Cairo, Egypt, before participating in five training programs held in Jerusalem and Gaza for journalists. He then worked as a news editor and reporter for several Palestinian publications in East Jerusalem. He has been a Gaza-based photographer for The Associated Press since 1993.
Esta página utiliza cookies. Consulte a nossa Política de cookies.