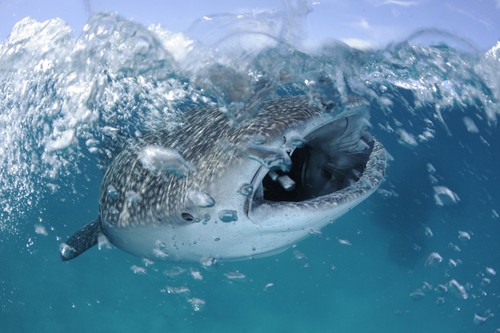 A whale shark breaks the surface while waiting to capture plankton drifting in on the tide, in the Hanifaru Bay marine reserve.

Whale sharks (Rhincodon typus) are slow-moving, filter-feeding sharks found in tropical and warm oceans, and are the largest non-mammalian vertebrates on the planet. The species originated some 60 million years ago, and individuals normally have a lifespan of around 70 years.

Currently, however, whale sharks are listed as a vulnerable species. They come under particular threat from pollution and strikes by boat propellers, and are also hunted for their fins and flesh.

The sharks feed by drifting with their capacious mouths open, drawing in plankton, fish, and small crustaceans. Foreign objects, such as plastic, can also be drawn into the shark’s digestive system, causing harm.