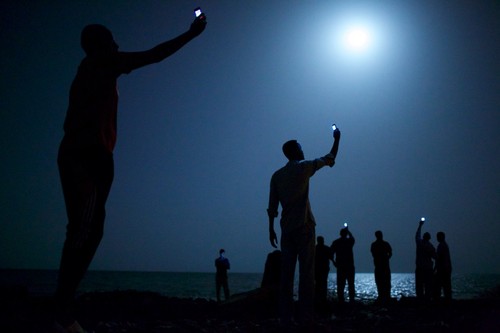 African migrants on the shore of Djibouti city at night, raising their phones in an attempt to capture an inexpensive signal from neighboring Somalia—a tenuous link to relatives abroad. Djibouti is a common stop-off point for migrants in transit from such countries as Somalia, Ethiopia and Eritrea, seeking a better life in Europe and the Middle East.

Nationality:
USA
Website:
www.stanmeyer.com
About:
John Stanmeyer, born in Illinois, is a founder member of the VII photo agency. Over the last decade, Stanmeyer has worked nearly exclusively with National Geographic, producing more than 12 stories for the magazine. Between 1998 and 2008, John was a contract photographer for Time magazine, during which time he photographed the war in Afghanistan, the fight for independence in East Timor, the fall of Suharto in Indonesia, and other significant world news events. His years with Time resulted in 18 covers of the magazine.
Esta página utiliza cookies. Consulte a nossa Política de cookies.