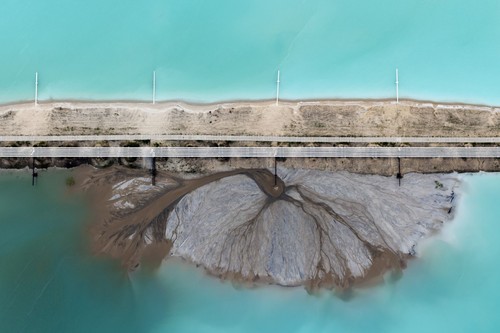 The flotation tailing reservoir at KGHM Polska Miedz copper mine. Tailings are waste streams produced by the process of extracting metal from ore, and consist of crushed rock and chemical effluent, much of it toxic.

Views from the air reveal an impact of industry on the environment that is hard to see from the ground, as effluent leeches into the Polish landscape—coal ash (the waste that remains after coal is combusted, containing toxic heavy metals) from power stations, by-products of mining, emissions from chemical factories.

NATIONALITY:
Poland
WEBSITE:
www.kacperkowalski.pl
ABOUT:
Kacper Kowalski, born in 1977, was supposed to be an architect. Yet five years of studies and four of designing were more than enough for him. In 2006, he eventually quit his job and turned to his two true passions: flying and photography. Both a pilot and a photographer, he takes unique control over each shot, capturing previously unseen natural environments and ordinarily inaccessible cityscapes. The results are unreal, almost graphic images, which reveal patterns, symmetries, and asymmetries created by humans and nature.
Esta página utiliza cookies. Consulte a nossa Política de cookies.