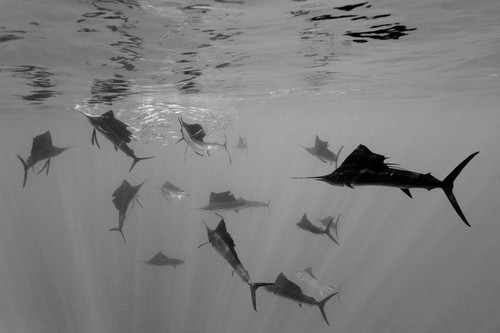 "Atlantic sailfish drive sardines into a bait ball off the Yucatan coast, Mexico. Sailfish get their name from the large dorsal fin that stretches almost the entire length of their body and is higher than their bodies are thick. They can swim at speeds of up to 110 kilometers per hour. Their size, speed and spirited fight make sailfish a favorite among big-game fishers."

Name:
Reinhard Dirscherl
Nationality:
Germany
Website:
www.ocean-photo.com
About:
Born in 1964, German photographer Reinhard Dirscherl has been an integral part of the international photography world as a nature, travel and underwater photographer. In 1989, he began his career as a photographer in Thailand while making his first underwater photos on the reefs around the Similan Island with a borrowed camera. The first results were a disaster from today's perspective, but he quickly became determined to improve. Not long after he returned to Germany, he acquired his first underwater camera.
Esta página utiliza cookies. Consulte a nossa Política de cookies.