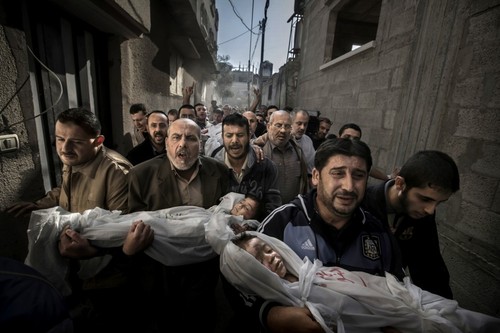 Two-year-old Suhaib Hijazi and his older brother Muhammad were killed when their house was destroyed by an Israeli missile strike. Their father Fouad was also killed and their mother was put in intensive care. Fouad’s brothers carry his children to the mosque for the burial ceremony as his body is carried behind on a stretcher.

Nationality: Sweden
Website: www.paulhansen.se, www.dn.se
About: Paul Hansen is a Swedish photojournalist and has worked for the daily newspaper Dagens Nyheter since 2000. He has received numerous awards, including being named Photographer of the Year by POYi in 2010 and 2013, Photographer of the Year in Sweden seven times, and two first place awards from NPPA. He is based in Stockholm.
Read more about this photographer
Commissioner:
Dagens Nyheter
Esta página utiliza cookies. Consulte a nossa Política de cookies.