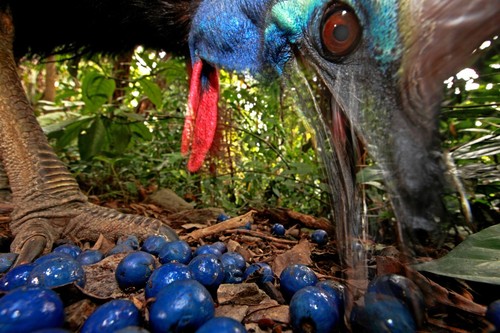 A southern cassowary (Casuarius casuarius) feeds on the fruit of the blue quandong tree. The flightless birds grow up to two meters in height, with males weighing some 55 kg, and females 76 kg.

Cassowaries are an endangered species, with around only 1,500 left in the wild. The birds are crucial to the ancient rainforest of northern Queensland, because they carry large seeds in their stomachs for long distances. Several dozen tree species appear to rely on cassowaries alone to disperse their seeds.

The birds are under threat from habitat loss, resulting from agricultural and housing development, killings by domestic dogs, and collisions with vehicles.

Nationality:
Germany
Website:
www.naturphoto.de
About:
Christian Ziegler is a photojournalist specializing in natural history and science-related topics. He is a regular contributor to National Geographic magazine and has been widely published in other magazines such as Geo, Smithsonian, and BBC Wildlife. A tropical ecologist by training, Ziegler has worked in tropical rainforests on four continents, and for the past ten years has been an associate for communication with the Smithsonian Tropical Research Institute (STRI) in Panama.
Esta página utiliza cookies. Consulte a nossa Política de cookies.