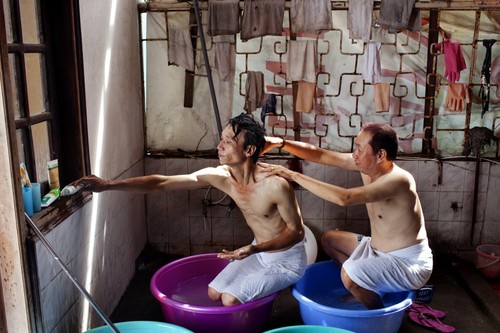 Businessman Hieu (58) takes a bath with Thang (62), a social worker. They have been partners for eight years.

Vietnam has historically been unwelcoming to same-sex couples, but in 2012 the Vietnamese government announced it was considering recognizing same-sex marriage, a move that would make it the first Asian country to do so. Despite past human rights issues and a long-standing stigma against homosexuality, parliamentary debate on same-sex marriage was scheduled for 2013. Polls showed that majority public opinion remained opposed to the idea. In August 2012, the country’s first gay pride parade took place in Hanoi.

Nationality:
Vietnam
Website:
www.maikaelan.com, www.mostartists.com
About:
Nguyen Thanh Hai (Maika Elan) was born in Hanoi, Vietnam, in 1986. After receiving her bachelor’s degree in sociology at the University of Social Sciences and Humanities, Maika started to use the camera to take pictures of her daily and private life in 2006. She turned to professional photography soon after, starting collaborations for editorial clients and fashion firms in Vietnam. In 2010, Maika moved to documentary photography and her first project, The Pink Choice, focuses on the personal lives of gay couples in Vietnam.
Esta página utiliza cookies. Consulte a nossa Política de cookies.