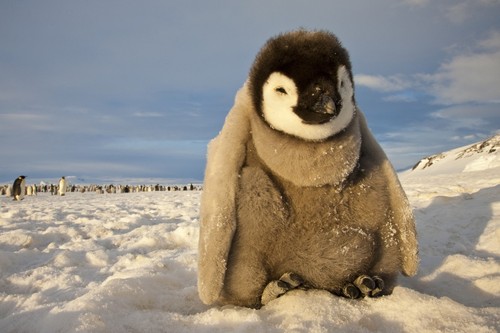 An emperor penguin shoots toward the surface, in the Ross Sea, Antarctica.

Emperor penguins’ body shape and poor climbing ability make it difficult for the birds to haul themselves ashore, especially onto icy or rocky coasts. It is also a moment when they are especially vulnerable to attacks by predators, such as the leopard seal.

But the flightless emperor penguin is capable of becoming airborne, by swimming at up to three times its normal speed, and launching itself from the water to clear the edge of a shoreline. Recent research shows that the penguins do this by releasing air from their feathers, in the form of tiny bubbles. The bubbles act as a lubricant, cutting drag, and enabling the birds to achieve bursts of speeds that would otherwise be impossible.

Nationality:
Canada
Website:
paulnicklen.com
About:
As a young boy, Paul Nicklen, a Canadian-born polar specialist and marine biologist, moved to Baffin Island and spent his childhood among the Inuit people. From them he learned the love of nature, the understanding of icy ecosystems, and the survival skills that have helped him to become one of the most successful wildlife and nature photojournalists.
Esta página utiliza cookies. Consulte a nossa Política de cookies.