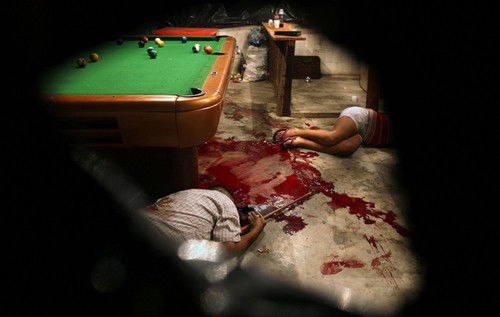 Bodies lie on the floor of a pool hall, after an attack by unidentified masked assailants, in Choloma, on the outskirts of San Pedro Sula, Honduras.

A wave of violence has made Honduras one of the most dangerous places on Earth, with an annual rate of 86 murders per 100,000 inhabitants. San Pedro Sula, often cited as Honduras’ most violent city, has a murder rate double the national average. Criminal gangs operate almost with impunity, imposing reigns of extortion, murder, and drug trafficking.

Nationality:
Peru
About:
Esteban Felix was born in Callao, Peru, in 1972.  He began his career in 1995 as a staff photographer at El Sol and El Comercio newspapers as well as at the political magazine Oiga. From 1998 to 2000, he participated in a World Press Photo seminar in Lima, Peru, tutored by Vincent Alabiso. In 2000, Esteban began working for the Associated Press as a staff photographer assigned in Latin America. His past assignments have included news, Coup D’état, presidential elections, earthquakes and hurricanes.