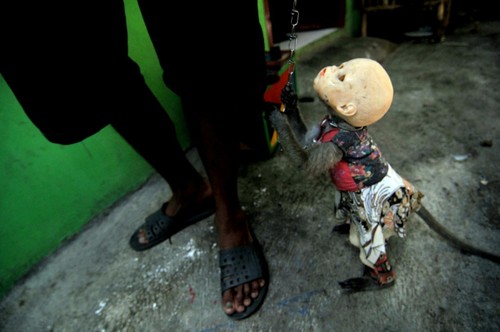 A long-tailed macaque, wearing patchwork clothing and a doll’s head, performs in Solo, Central Java. The monkeys are generally purchased at an animal market and trained to carry out such activities as walking on stilts, riding bicycles, or simply begging.

Once a popular children’s entertainment in villages, performing monkeys are increasingly becoming a feature of life in the city, where their minders use them to earn money from waiting motorists at traffic intersections. A monkey can bring in around €4 a day.

Macaques are not endangered, but concerns have been raised about the welfare of performing animals, particularly as numbers in cities increase.

Nationality:
Indonesia
Website:
alilutfi77.blogspot.com
About:
Ali Lutfi was born in Boyolali, Indonesia, in 1976. He started his career in 1998 as a photojournalist and photo editor for a local newspaper in Surakarta. He started freelancing in 2007 and in 2009 he began contributing for the English-language newspaper, Jakarta Globe, covering Surakarta and the Central Java province.
Esta página utiliza cookies. Consulte a nossa Política de cookies.