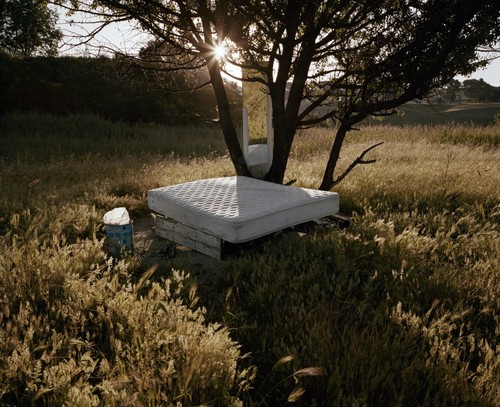 Sharon, a Nigerian sex worker, sits on her makeshift bed in the countryside outside Rome.

Roadside prostitution in Italy is conducted primarily by migrant sex workers. Some of the women are victims of trafficking—they have been deceived by criminal gangs into coming to Italy, lured by promises of legitimate jobs. Others have willingly been smuggled into the country, but find prostitution the only way that they can earn enough money to send back to their families, or to pay back the thousands of euros they owe to smugglers.

For nearly twenty years, women from Benin City, in the state of Edo in Nigeria, have been going to Italy to earn money as sex workers, hoping to ensure a better future for their families. The women organize the operation among themselves, and are ostensibly released from obligation once they have paid off their debt, but still find it difficult to secure work that is unrelated to sex.

Nationality:
Italy
Website:
www.paolopatrizi.com
About:
Paolo Patrizi is a documentary photographer whose stories explore underlying themes of - and contradictions between - tradition and modernity, and the cultural disconnection produced by rapid economic growth. He began his career in London, working as an assistant to other professionals. While doing freelance assignments for British magazines and design groups, he started to develop projects of his own. Today, his work is featured in leading publications, and has been exhibited and awarded internationally.
Read more about this photographer