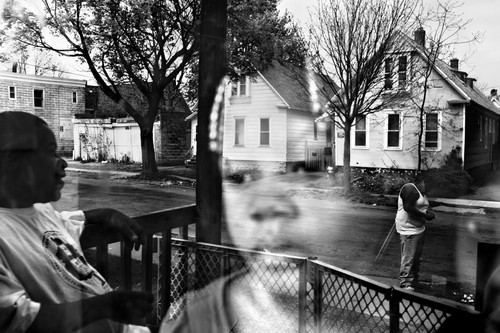 A family in the Crescent area of Rochester.

The group of deprived neighborhoods known as the ‘Crescent’, around the northern edge of downtown Rochester, New York State, USA, is renowned for its high crime and murder rates. Reasons given for these include a depressed local economy, and the large number of empty houses, prone to becoming locations for drug dealing.

Nationality:
Italy
Website:
Paolo Pellegrin's profile on Magnum Photos' website, www.magnumphotos.com
About:
Paolo Pellegrin was born in 1964 in Rome, Italy. He studied architecture at Sapienza Università di Roma, before moving on to photography at the Istituto Italiano di Fotografia, also in the Italian capital. Between 1991 and 2001, Pellegrin was represented by Agence VU in Paris. In 2001, he became a Magnum Photos nominee, and a full member in 2005. He is a contract photographer for Newsweek magazine in the US and Zeit magazine in Germany.
Read more about this photographer
Esta página utiliza cookies. Consulte a nossa Política de cookies.