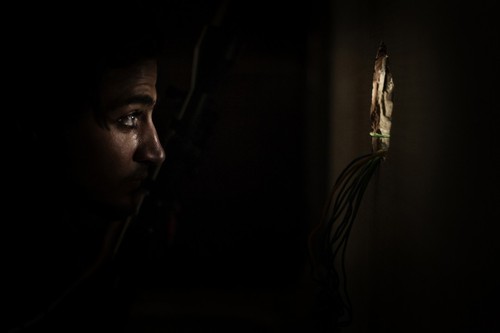 A Free Syrian Army fighter mourns the death of his brother, killed during clashes with government forces.

The Syrian commercial hub of Aleppo was the scene of some of the bloodiest clashes in the ongoing uprising against the regime of President Bashar al-Assad. Both government and opposition forces considered control of Aleppo to be strategically important to their aims.

The FSA first seized parts of the city in July. In the months that followed, government forces battled to recapture it, with limited success. By the end of the year, the Syrian military had control over a western segment of the city, with the rebels entrenched in much of the east and south. Some of the fiercest fighting was in and around the Old City.

Nationality:
Italy
Website:
www.fabiobucciarelli.com
About:
Before becoming a documentary photographer, Fabio Bucciarelli received a MSc in engineering from the Polytecnico di Torino. He also attended the Universitat Politècnica de València, where he specialized in digital imaging. From 2009, he devoted himself entirely to photography and started working as a staff photographer for La Presse/AP.
Read more about this photographer