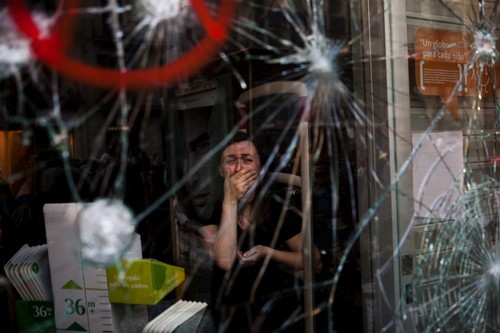 Mireia Arnau (39) reacts behind the broken glass of her shop, stormed by demonstrators clashing with police in Barcelona, during a general strike on 29 March.

The national strike was called in protest against the government’s labor reforms. In an ongoing climate of economic difficulty, parliament was proposing stringent cuts, as well as measures aimed at making it easier for businesses to fire employees.

Spain’s unemployment was running at over 24 percent, the highest in the European Union, with half of under 25s out of work. Most protests across the country were peaceful, but in Barcelona some demonstrators hurled rocks

Nationality:
Spain
Website:
www.morenatti.com
About:
Emilio Morenatti, a native of Spain who studied graphic design, started working as a photojournalist for a local newspaper in 1989. In 1992, he joined the Spanish news agency Efe. He has worked exclusively for the Associated Press since March 2004. In 2009, Pictures of the Year International named him newspaper photographer of the Year and the National Headliner Award gave him their highest honor, a gold medal. In 2010, The National Press Association of America named him the Photographer of the Year.
Esta página utiliza cookies. Consulte a nossa Política de cookies.