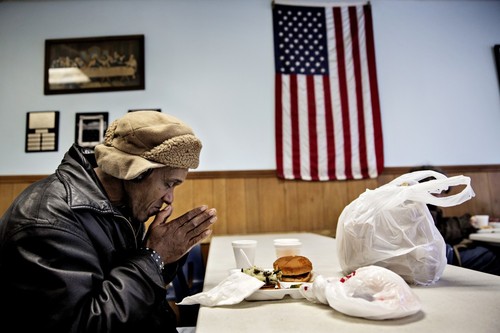 At the Dining Hall

People who are homeless or in financial difficulty can come to the hall for warmth, a good meal, and to socialize. Youngstown, which is struggling from the loss of steel industry jobs, is one of the poorest major cities in the US, with more than one in three citizens living below the poverty line,

Nationality:
Denmark
Website:
greatphotojournalism.com/jacobehrbahn.html
About:
Jacob Ehrbahn is a Danish photojournalist who has been a staff photographer with the Danish daily national newspaper Politiken since 2003. He has received numerous awards for his work, including being named second and third place Newspaper Photographer of the Year by POYi in 2004 and 2012. This year, he was named Photographer of the Year in Denmark for the second time. Jacob lives in Espergaerde outside of Copenhagen.
Esta página utiliza cookies. Consulte a nossa Política de cookies.