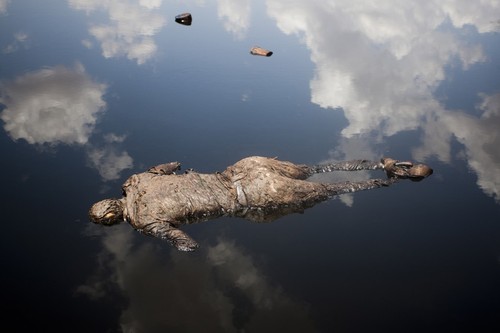 A Sudan Armed Forces (SAF) soldier lies dead in a pool of oil next to a leaking oil facility in the town of Heglig, after a clash with the Sudan People’s Liberation Army (SPLA).

The SPLA is the army of the Republic of South Sudan. For more than half a century Sudan’s northern regime in Khartoum fought the south in a conflict that cost two million lives. South Sudan gained its independence from the north in 2011, but the exact demarcation of the border was not settled, and some areas remained contested.

In April a battle broke out between Sudan and South Sudan over disputed oil fields, with the area around Heglig—officially in the north but claimed by the south—seeing some of the fiercest fighting. In September 2012, the presidents of Sudan and South Sudan agreed trade, oil and security deals, and planned to set up a demilitarized buffer zone, but border disputes remained unresolved.

Nationality:
Switzerland
Website:
www.dominicnahr.com, Dominic Nahr's profile on Magnum Photos' website
About:
Dominic Nahr was born in Switzerland, but raised in Hong Kong, where he established himself as a photojournalist working as a staff photographer for the South China Morning Post. In 2007, while at university in Toronto, Dominic became a freelance photographer, his work appearing in such publications as Newsweek and GQ. His current clients include National Geographic, Time and The Wall Street Journal. Dominic's accolades include an Oskar Barnack Newcomer Award, a PDN Top 30 Under 30, and an exhibition at Visa pour l'Image in Perpignan.
Esta página utiliza cookies. Consulte a nossa Política de cookies.