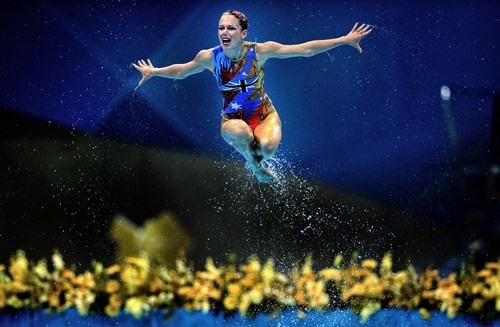 A member of the Australian synchronized swimming team competes at the Olympic Games in London, on 10 August. Russia won gold in the event for the fourth consecutive year. The Australian team came last out of eight finalists.

Nationality:
China
About:
Wei Zheng was born in Lanzhou, Gansu Province, China in 1979. He started learning about photography during his childhood. He majored in movie and picture photography at the famous Beijing Film Academy. He has covered many sports events which include the 2008 Beijing Olympic Games, 2012 London Olympic Games, 2010 Vancouver winter Olympics Games, 2010 FIFA World Cup and the world championships of many athletics, including badminton, table tennis, fencing and swimming. His personal photography has been on exhibition in China three times.
Esta página utiliza cookies. Consulte a nossa Política de cookies.