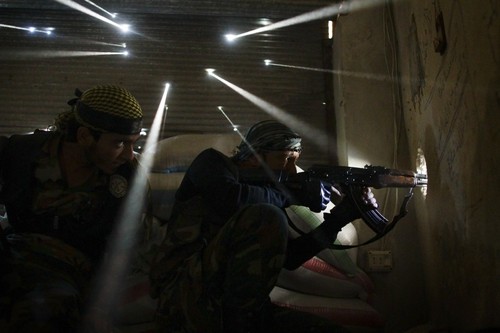 Both rebel and regime forces deployed snipers, and the national army made use of heavy artillery and air power to bombard occupied areas. A UN-brokered ceasefire in late October was not honored by either side, and casualties rose steeply in November.

Nationality:
Mexico
Website:
www.javiermanzano.com
About:
Javier Manzano is a photojournalist and filmmaker based in the United States. Born in Mexico, Manzano moved with his family to the US at the age of 18. To a large extent, Manzano's work has focused on the many cross-border issues that bind these two nations together - as estranged neighbors, vital partners and at times feeble associates. His career started in the newspaper industry as a photo- and videojournalist, and later expanded into television and electronic media. The Rocky Mountain News, Manzano's last employer, closed its doors in February of 2009.
Esta página utiliza cookies. Consulte a nossa Política de cookies.