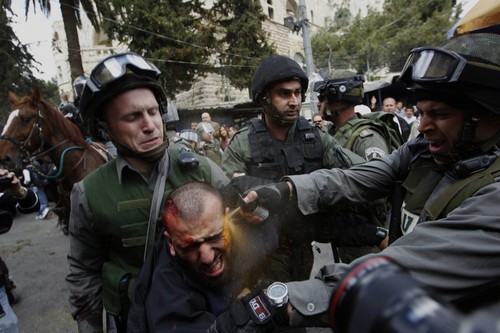 Israeli border police officers use pepper spray as they detain a Palestinian protestor during clashes after Friday prayers on Land Day, outside Damascus Gate in Jerusalem’s Old City.

Land Day commemorates the killing of six Arabs by security forces on 30 March 1976, amid protests against land appropriation in Galilee. A number of the annual rallies marking the event in Jerusalem, Gaza, and the West Bank turned violent, with demonstrators throwing stones, while security forces fired rubber bullets, tear gas, and stun grenades to disperse the protests.

Nationality:
Jordan
About:
Ammar Awad was born in Bethlehem in the occupied West Bank in 1981. Awad has a Jordanian nationality. Ammar joined Reuters in 2000 as a stringer and became a staff photographer in 2007. Awad covers events in Israel and the West Bank has covered events such as the Second Lebanon War in 2006 and the Israeli offensives in Gaza. Awad also travels and assists with Reuters coverage around the Middle East: He was in Iraq in 2003, in Lebanon in 2006 and in Yemen and Libya in 2011.
Esta página utiliza cookies. Consulte a nossa Política de cookies.