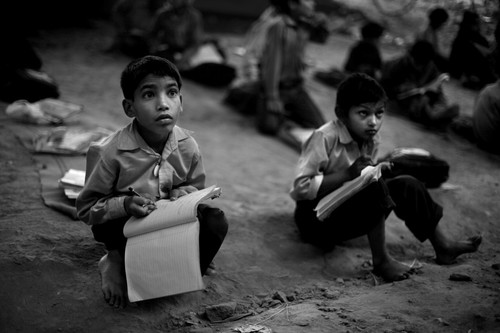 Children of local laborers clean the area that serves as their classroom, at a free school under a metro rail bridge, in New Delhi, India.

The school was founded by Rajesh Kumar Sharma (40), who was unable to complete his own college education, because of financial difficulties. Every day he takes two hours out to teach, while his brother replaces him at his general store. Together with an assistant, Laxmi Chandra, Sharma gives lessons to around 45 children daily, having persuaded their families to free them from working to earn money. He aims to prepare his students for admission to government schools, and to equip them for overcoming poverty.

Nationality:
India
Website:
www.altafqadri.com
About:
Altaf Qadri was born in Srinagar, Kashmir and studied science at Kashmir University. He began his working life as a computer engineer, before taking up photography as a profession. Qadri grew up amid mass uprisings against Indian rule and witnessed many important events and incidents as a teenager. He was later sent to New Delhi, where his sister lived. When a friend gave him a camera, Qadri began to shoot and soon realized that the camera could become a witness along with him.
Esta página utiliza cookies. Consulte a nossa Política de cookies.