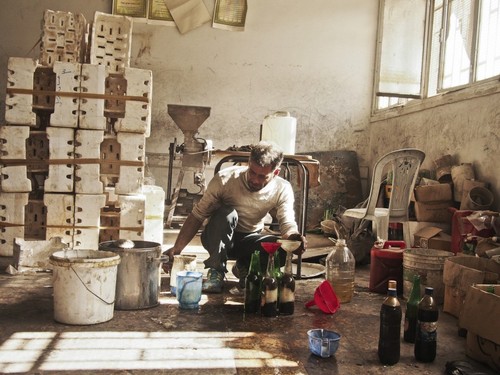 A bomb maker for Syrian rebel forces works in a makeshift bomb factory in the country’s largest city, Aleppo. As the civil war in Syria dragged on into its second year, conflict broke out between factions within the armed opposition forces. Much of the in-fighting was directed against the al-Qaeda-linked Islamic State of Iraq and the Levant, and other Islamist groups focused on enforcing sharia law. As rebel factions turned on one another, government troops took the opportunity to launch concerted attacks on rebel-held and contested areas, subjecting Aleppo to heavy bombardment.

NATIONALITY:
Spain
WEBSITE:
Moises Saman's profile on Magnum Photos' website
ABOUT:
Moises Saman was born in 1974 in Lima, Peru, but spent most of his youth in Barcelona, Spain, after his family moved there. Moises studied communications and sociology in the United Sates at California State University, graduating in 1998. It was during his last year in university that Moises first became interested in becoming a photographer, influenced by the work of a number of photojournalists that had been covering the wars in the Balkans.
Esta página utiliza cookies. Consulte a nossa Política de cookies.