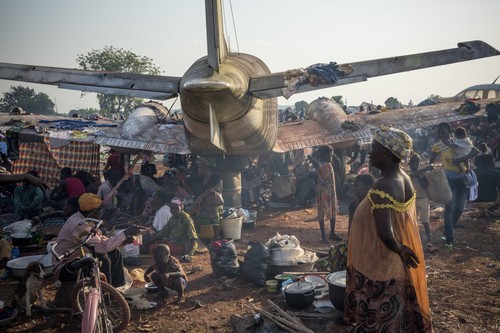 A relative of 20-year-old Sept-Abel Sangomalet mourns his death. Members of an armed Muslim group stabbed Sangomalet while he was asleep. His body was found outside his family home.

In March, an alliance of mainly Muslim rebel groups known as Séléka seized power in the Central African Republic (CAR). The Séléka were then disbanded, but renegade groups continued to target civilians of the country’s Christian majority. Vigilante Christian militia, known as Anti-balaka, sprung up to defend their communities. Hundreds were killed, and some 400,000 people displaced, as violence in the CAR escalated. France sent 1,600 troops to the country to protect civilians and disarm the various militias, while the United Nations warned of deepening chaos and a spiral into genocide.

NATIONALITY:
France
WEBSITE:
www.williamdaniels.net
ABOUT:
William Daniels' work revolves around social issues and humanitarian concerns mostly focusing on isolated or weakened communities. His past projects have focused on malaria, AIDS and tuberculosis, as well as the aftermaths of the tsunami in Asia and the earthquake in Haiti. He has also covered conflict in Libya, Kyrgyzstan and Central African Republic.
Esta página utiliza cookies. Consulte a nossa Política de cookies.