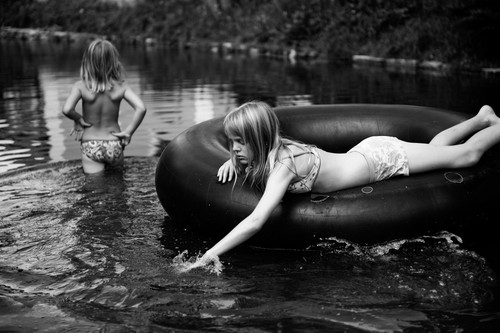 Hannah (7) and Alena (9) are two sisters who live in Merkenbrechts, a village of 170 inhabitants in Waldviertel, an isolated rural area of Austria, near the Czech border. The girls have two older brothers, but spend much of their time together in a carefree life, swimming, playing outdoors, and engrossed in games around the house.

NATIONALITY:
The Netherlands
WEBSITE:
www.carlakogelman.nl
ABOUT:
Carla Kogelman (b. 1961) has worked in the theatre industry for 25 years. In December 2011, she graduated at the Foto Academie Amsterdam. She was always interested in the stories backstage, the actors' stories instead of those being performed on stage. Her portrait series of actors backstage won first prize at the Zilveren Camera in 2011 and the Dutch national photography portfolio contest, the SO (Selection Of Dutch Photography) Awards, in 2013.