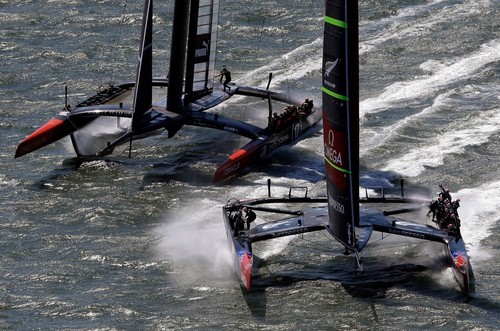 The 34th America’s Cup was held in San Francisco Bay in September. Oracle Team USA had to defend their title against challengers Emirates Team New Zealand. A team needs to win a total of nine races to secure the cup. By the eleventh day of the contest, the New Zealand team, skippered by Dean Barker, led 8-1. Skippered by James Spithill, Oracle Team then staged an extraordinary comeback, winning eight races in a row to beat the New Zealanders and retain the cup.

NATIONALITY:
USA
WEBSITE:
ezrashaw.com
ABOUT:
Ezra Shaw has been working for Getty Images as staff photographer for more than 15 years. He began his career assisting many Sports Illustrated photographers in both London and New York City. After settling down in New York City, Shaw spent nearly 10 years traveling the world with New York City as his base before relocating to Sydney, Australia, in 2006 to experience what life “down under” had to offer. After spending nearly three years in Australia, Shaw relocated to Marin County in northern California.