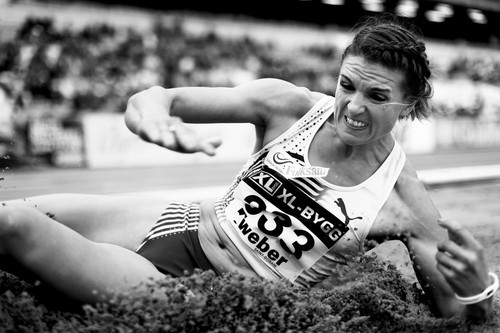 Nadja Casadei sets a personal best for long jump, in a contest between Finland and Sweden, in 2012.

Heptathlon athlete Nadja Casadei participated in both World and European Championships in athletics, before being diagnosed with lymphatic cancer, in the summer of 2013. Casadei was determined to continue her athletic career, and kept up a training regime throughout her treatment for the disease. The heptathlon is a grueling two-day event that includes hurdles, high jump, long jump, shot put, javelin, and both 200m and 800m running. Casadei kept up her regime and her spirits during her period of chemotherapy, and declared her intention to try for the 2016 Rio de Janeiro Olympics.

NATIONALITY:
Sweden
WEBSITE:
www.peterholgersson.se
ABOUT:
Peter Holgersson was six years old when he started taking pictures. He learned the basic settings on his first camera from his father. He continued with photography as a hobby until 2011, when he began shooting sports photography for Swedish newspapers. Currently, Peter divides his time between freelance photography and lecturing at Linköping University. In addition to his first-place prize in the 2014 World Press Photo Contest, Peter's work was awarded second prize in the 2013 Pictures of the Year International sports picture story category.
Esta página utiliza cookies. Consulte a nossa Política de cookies.