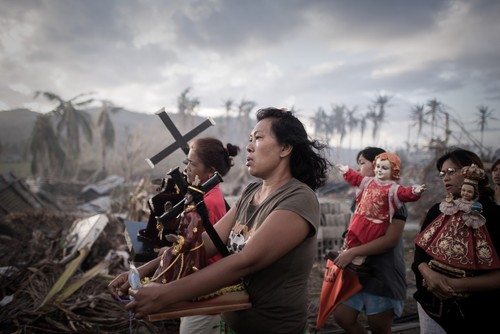 Survivors carry religious images, ten days after Typhoon Haiyan made landfall in the central Philippines. One of the strongest typhoons ever recorded, Haiyan raged through 47 provinces, causing immense destruction. Over a million houses were damaged, half of them totally destroyed, and more than 4 million people were displaced. Large areas were left without electricity or an adequate water supply for weeks, and the devastation of infrastructure made food distribution and medical services difficult. Many people made their way to less-affected areas, such as the capital Manila, and some cities reported a near doubling of their populations.

NATIONALITY:
France
WEBSITE:
Philippe Lopez's AFP portfolio
ABOUT:
Philippe Lopez is a French national who has worked for Agence France-Presse (AFP) in Asia for 14 years. He began his career with the agency as a freelancer in Cambodia in 1999 and became a staff photographer the following year. In 2002, he was named as a photo editor in New Delhi, India, as part of the agency's development of its South Asia photo desk. He joined the agency's regional headquarters in Hong Kong as a picture editor in 2005 and became a staff photographer in Shanghai in 2009. He returned to the Hong Kong bureau in 2011.
Esta página utiliza cookies. Consulte a nossa Política de cookies.