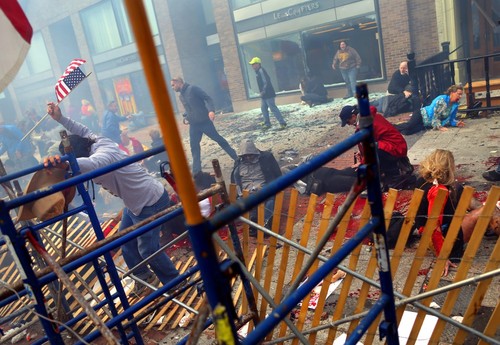 Carlos Arrendondo (left) climbs over barricades on Boylston Street, to reach people injured by the first of two bombs that exploded near the finish line at the Boston Marathon, on 15 April. The bombs went off 12 seconds apart, killing three people and injuring at least 264. The winners had crossed the line some hours earlier, but thousands of people were still to finish, and spectators lined the street. On 18 April, the FBI released photographs and video footage of two suspects, later identified as Chechen brothers, Dzhokhar and Tamerlan Tsarnev.  Shortly after they had been identified, the brothers allegedly killed a police officer and hijacked a car. Tamerlan died following the subsequent shoot-out with police, and Dzhokhar was arrested hours later.

NATIONALITY:
USA
ABOUT:
John Tlumacki has been a staff photographer for the Boston Globe for 32 years. He has covered three Winter Olympics, Superbowls, and World Series. He was a finalist for the Pulitzer Prize in 1989 for his coverage of the Berlin Wall. He was named Boston Press Photographer of the Year in 2011.
Esta página utiliza cookies. Consulte a nossa Política de cookies.